skip to main | skip to sidebar

Pleased to announce the release of my poetry chapbook, Stone Bride Madrigals, published by corrupt press (Paris). Special thanks to editor Dylan Harris. Love to David Heg for the cover art. See more of David's photography, excerpts from my poems and my video readings here.

On a snowy write in Brooklyn, I met the statue who was to appear in many of the poems I'd go on to write -- it was the moment I started writing poetry. My statue walked through all kinds of disintegration. Sometimes she saw death. These poems are her songs. 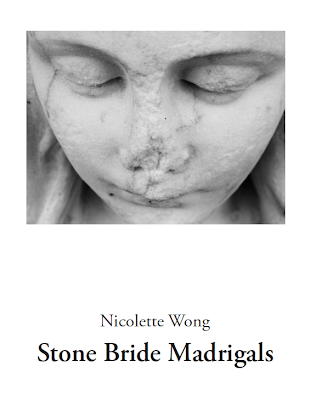 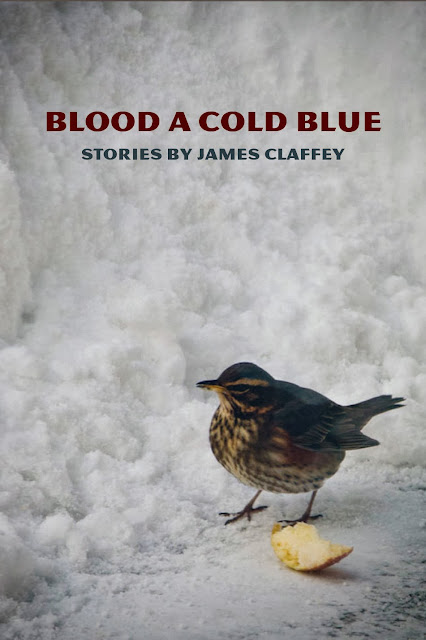 Get your copy of Blood a Cold Blue here.

Nicolette: I see your characters (esp. the narrators) drift in and out of ruins a lot. How did you tread that fine line yourself when you were writing these stories?

James: I’m not sure I trod the fine line in the writing of the stories, as the voice of each comes from a place of unknowing, of subconsciousness. Ruin and its avoidance were part of my experience growing up in Dublin. My father lost the family business when I was a small boy, and that experience shaped him as a person for the rest of his life. We’d drive past the place every summer on the way to the West of Ireland on our holidays and he would curse, become morose, and bemoan the loss of what had been a life of some privilege. After
that loss he worked to support his young family, a lot of sacrafice, a great deal of pride. From those memories, from the struggles my parents went through, I saw the shadow of ruin on our house and it has stayed with me to this day. Also, I’m captivated by the dichotomy between survival and disaster, the gust of fortune that might consign a character one way or the other. I find much to explore in flawed characters and don’t for the most part write about happy, positive people. Strugglers are much more interesting, don’t you think?


Nicolette: Your portrayal of these strugglers is so visceral, too. "My teeth chatter from the cold, the edge of my left eye twitches faster than my heartbeat, and there's a hollow feeling in the roof of my mouth...I knew she was dead from the way her neck angled, the pale skin, her cigarettes on the ground beside her--Marlboro Lites--and me having told her over and over that smoking kills." ("The Way Her Neck Angled")

Besides your memories -- which fill that place of unknowing you re-create on the page -- what else would you say inform/shape your approach to characterization?

James: Noticing. Paying attention to the small things, the rust on a hinge, the shade of lipstick on an old woman, the shape of arthritic fingers. I fall back on the quote, "God is in the details," to explain my approach to character. For me, the particular is critical to flesh out a character, those particular quirks and traits that mark one person apart from another. As I get responses to the book I notice my writer's eye tends towards the grimness and the seediness of life. This I have to ascribe to my self-reflective manner and the darkness that comes from an Irish childhood where all about me were destroyed people hiding in corners of the Dublin streets. When I was a kid we came across tramps, tinkers, beggars, and in their faces the etched lines of hard lives must have spoken to me at a deep level. It's not that I don't embrace hope and joy and beauty, I do, but through a particular prism that contorts those things into something more problematic, more honest, more real.


Nicolette: One thing I've always loved about your writing -- the rhythm. It's a moving shadow that traces the character's emotions and it's very palpable. How do you find/relate to this music, when you write?

James: The rhythm is something I found happened when I stopped writing for the express purpose of finding an agent, getting a publishing contract, pleasing other parties and other monstrosities! A rhythm existed in my writing before all of that, but it was subverted by my own shortcomings and inadequacies, and when I gave up on the notion of pleasing others, the writing found its own voice, its own path so to speak. Some of the musicality is down to growing up in Ireland, immersion in the patterns of speech that mark our island soul, and even though I've been away now for twenty years, those important formative years when language acquisition took place cemented those Celtic rhythms and notes in my brain. As far as musicality goes I'm useless in terms of playing instruments, though I do a little tone-deaf singing when I read certain stories that contain song lines. Sometimes I listen to music when I write, mostly instrumental, some Sigur Ros, some classical, some operatic, and as background music I find it soothing, though maybe the darkness comes from the mood created by the music.


Nicolette: Aren't you always juggling a number of writing projects? I think I've mostly read your flash fiction (and some prose-poemy pieces) so far. Are you working on anything else these days?

James: Juggling is generous. I've fallen in and out of projects, some of which are ongoing, some lie fallow at present and I may go back to them and revive the writing. I've been working on Pure Slush's 2014 project where a story a month set on the same day reveals a world to the reader over the timeframe of one calendar year, and I recently spent three days in Big Sur at a Benedictine monastery working on a novel that Thrice Publishing will be bringing out next year. I spent the time revising the book as it stands, adding new sections to smooth transitions between chapters, and generally polishing the language to a point where I can comfortably say the book is ready for the light of day. I'd like to find a happy medium where I don't have too many projects going on, but that's probably not very likely!


Nicolette: That brings me to the question I've always wanted to ask you. How do you approach the shift from flashing to writing a novel? Whenever I read your flash fiction, I listen to the rhythm and emotions and think, "There's something he's not showing here... The bigger picture."

James: Yes, there's a great deal "below the water" in the flash pieces, the unsaid, the unmentionable. I like to skirt the edges and give the reader these clues, hints, as to what's going on beneath. The switch to the novel is slightly more difficult in terms of creating a "whole world" situation, and making sure the whole thing has cohesiveness. I've worked hard on showing a world in the novel that encompasses the main character's hometown, and I hope it succeeds on the page. With flash it's easy to declare a piece finished and leave much unsaid, whilst with the novel there's a pull that I feel at work that makes me want to reveal the layers of the story in a more complete way. I'm anticipating the novel will stay true to the rhythm and patterns of my other writing, and that there won't be any sense of the novel "failing" in terms of voice and authenticity.

James Claffey hails from County Westmeath, Ireland, and lives on an avocado ranch in Carpinteria, CA. His work has appeared in the New Orleans Review, Word Riot, Metazen, Necessary Fiction, FWriction and many other places.
Posted by Unknown at 10:52 PM 2 comments: